Rad Muay Thai works to motivate and teach people of any age and fitness level to push past previous limits they've set for themselves.

Through martial arts and combat training we provide a fun and functional way to get in the best shape of your life. Learn Muay Thai and move up the ranks.

Gain confidence, discipline, and the drive to achieve any goals you set for yourself on and off the mat.

​We aim to bring fitness through combat sports training to the great people of Colorado.

What to expect during your first class. 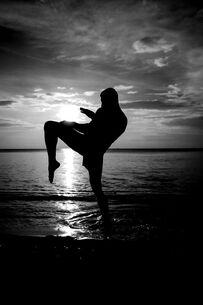 ​Muay Thai is the art of 8 Limbs from Thailand. Muay Thai utilizes hands, shins, knees, and elbows. Along with stand up striking, Muay Thai uses various clinching techniques as well.

Originally Muay Thai was a traditional martial art known as Muay Boran which was taught as a practical fighting technique used for actual warfare. 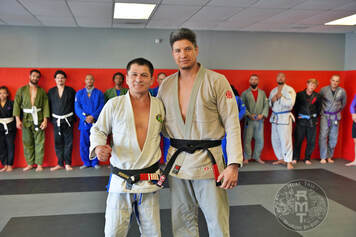 BJJ promotes the concept that a smaller, weaker person can successfully defend themselves or another against a bigger, stronger, heavier assailant by using proper technique, leverage, and most notably, taking the fight to the ground, and then applying joint locks and chokeholds to defeat the opponent. BJJ training can be used for sport grappling tournaments and in self-defense situations. Sparring (commonly referred to as "rolling" within the BJJ community) and live drilling play a major role in training, and a premium is placed on performance, especially in competition, in relation to progress and ascension through its ranking system.
​
Since its inception in 1882, its parent art of judo was separated from older systems of Japanese jujutsu by an important difference that was passed on to Brazilian jiu-jitsu. It is not solely a martial art; it is also a sport, a method for promoting physical fitness and building character in young people, and ultimately a way of life.

NOGI SUBMISSION GRAPPLING
Submission fighting, submission grappling, sport grappling, or simply No-Gi, is a formula of competition and a general term for the martial art of ground fighting with the aim of obtaining a submission using submission holds. The term submission wrestling/grappling or NoGi usually refers only to the form of competition and training that does not use a "jacket", "gi," or "combat kimono," often worn with belts that establish rank by color.
The sport of submission wrestling or grappling brings together techniques from Folk Wrestling,  Judo, Greco-Roman Wrestling, Brazilian Jiu-Jitsu Jiu-Jitsu and Sambo. Submission fighting is great for fitness, martial arts, and even mental strength training. The intricacies of grappling paired with the grueling training make for a great atmosphere to push yourself both physically and mentally as a martial artist or athlete. 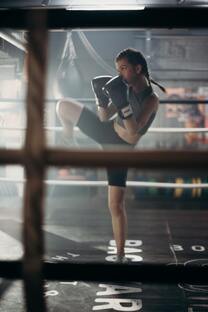 Bootcamps are great strength and conditioning sessions put together for a group instead of one on one personal training. Generally a group or class is put through a rigorous exercise routine with an emphasis on overall functional fitness enhancing strength, power, and agility.